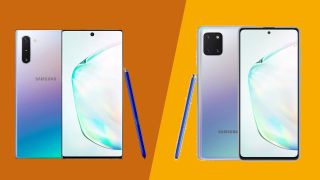 The new budget Galaxy Note phone is now your most accessible way to get a new smartphone with an S Pen stylus, with a price tag that will likely undercut its higher-end siblings and possibly even older Notes – and there are enough cool features to make it a viable alternative to those too.

It’s worth pointing out though that the phone isn’t actually out yet at the time of writing, and there are a few things about it we don’t know – but we’ve tested it briefly so have a good idea as to its features and performance.

Due to sales and discounts since the Note 10’s August 2019 release date, its price has dropped a little bit, but not by a huge amount, and it’s still one of the priciest phones available right now.

The Samsung Galaxy Note 10 Lite does have less storage space and RAM (depending on region) though, as we'll get in to.

Neither of the devices has a 3.5mm headphone jack, so if you’ve got wired headphones a Note is not for you, but both have the standard USB-C port. They’ve also both got an S Pen stylus; a guarantee since they're Galaxy Note devices.

One design difference between the two is that while both have the cameras nestled in the top left corner, the Note 10 has them in a vertical row while the Note 10 Lite has them housed in a square camera block. It’s not a huge difference in the grand scheme of things, but it’s an easy way to tell the devices apart.

The other main difference between the two handsets is the screen, as while the budget device has a 6.7-inch Super AMOLED display, the standard Note 10 has a 6.3-inch Dynamic AMOLED screen. The latter device also has a screen that’s rounded at the edges, which is a decidedly premium feature that the Note 10 Lite doesn’t have.

The difference is definitely marginal, though, with the Samsung Galaxy Note 10 coming in at 401 pixels per inch, while the Note 10 Lite has 394.

Finally, both devices have a punch-hole cut-out that houses the front-facing camera in the top center of the screen, so that's one thing the handsets have in common.

In terms of raw specs, the Samsung Galaxy Note 10 Lite's camera is a lot like the original Note 10’s: there’s a 12MP main and 12MP telephoto camera on both, joined by an ultra-wide lens with a 12MP sensor on the Note 10 Lite and a 16MP sensor on the base Note 10.

We haven’t tested the Samsung Galaxy Note 10 Lite’s camera in detail, but we’d imagine it takes pictures of almost as high quality as the Note 10. Lots of the burden of capturing a great picture is on software, after all, and both devices have the same Samsung post-processing software.

On the front of the Samsung Galaxy Note 10 Lite there's a 32MP camera, which is much more high-res than the 10MP selfie camera on the Galaxy Note 10, but because of differences in the pixel size, we’d actually imagine the Note 10 would take better pictures in low-light settings, as it would pick up more light.

The 3,500mAh battery in the Samsung Galaxy Note 10 is fine, but nothing special, and while we found it lasted us for a day of normal use, with heavy use it ran dry before the day was up.

We’d expect the 4,500mAh power pack in the Galaxy Note 10 Lite to last a lot longer, despite the phone’s bigger screen, and so it’s likely if you want to use your phone for a whole day of heavy use, this is probably the device for you.

With regards to charging, we don’t actually know the Galaxy Note 10 Lite’s powering speed, but the standard Note 10 has 25W wired charging. We’re expecting the Galaxy S10 Lite to have 15W fast charging, so it’s possible the Note 10 Lite will have the same.

We’re not expecting the Galaxy Note 10 Lite to have wireless charging, but the original device has it at 12W. There’s also Wireless PowerShare available on the Note 10, which turns the device into a 9W wireless charger. This is lacking on the Lite.

So whether you’re a fan of wired or wireless charging, it’s likely the Samsung Galaxy Note 10 is a better device in terms of getting juice into your phone - but you may need to juice it up more often.

The Samsung Galaxy Note 10 has either a Snapdragon 855 or Exynos 9825 chipset, depending on region. These are both high-end chipsets from 2018.

So if you’re looking for top-end processing power, the pricier device is among the best Samsung options (well, until the Samsung Galaxy S11 comes out with its expected Snapdragon 865).

There’s more RAM in the standard Note 10 too, at least in certain regions. That device has 8GB of RAM, but the Note 10 Lite has 6GB or 8GB depending on where you live in the world (although we’re not exactly sure which regions will get which version yet).

There's also more storage in the standard Samsung Galaxy Note 10, as it comes with 256GB, while the Note 10 Lite has 128GB, though the Lite model also has a microSD card slot, which the standard Note 10 doesn't.

The Samsung Galaxy Note 10 comes with Android 9, whereas the Lite has the newer Android 10 installed. That’s not a huge difference, as it’s pretty easy to upgrade the old model, but it will take a little time too.

General use will be similar on the devices though thanks to both handsets running Samsung’s One UI overlay over Android, with a pale aesthetic style, and icons with rounded edges. Some people may like this design, while some will prefer UI overlays from other companies.

The Samsung Galaxy Note 10 has slightly better cameras, more power, a higher pixel density and a premium-looking curved screen. It’s a slightly higher-end device in general, so if you’ve got a high budget, perhaps it’s the phone for you.

Saying that, the Galaxy Note 10 Lite likely has a much lower price point, and there aren’t many huge differences between the two phones. So if you’re on a budget, or just don’t want to spend all your money on a top-end flagship when you don’t need to, it could be a preferable handset.